Optimistic Investors Cheered 2017 Across the Globe, Tax Reform Sets the Stage for Strong Economic Growth in 2018

While it seems like a lot happened in 2017, in retrospect we struggled to find any one event that defined the year… that is until Tax Reform passed.  The Trump Presidency had its inaugural legislative success with the passing of Tax Reform in December.  In our opinion, much of 2017’s double digit stock market increases were hinged on expectations of a more business friendly environment in the United States under the Trump Administration.  Now we start 2018 with a major legislative step towards realizing those expectations.

The U.S. wasn’t alone in its market advance during 2017.  In fact, financial markets across the globe were also up double digits.  Strength across the global markets were the result of synchronized central bank easing, the return of global growth, and relatively benign international conflict.  Going into 2018, many central bankers across the globe have laid the ground work for a return to normal monetary policy.  This will likely result in rising global interest rates which, in turn could put a crimp on market valuations, currently at the second most expensive price-to-earnings ratio ever recorded according to the Shiller PE ratio (first being the pre-Great Recession). 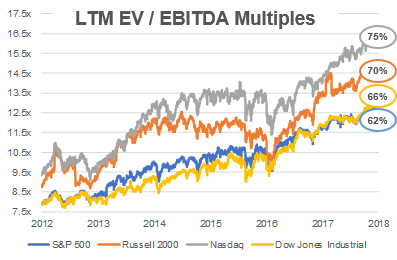 U.S. mergers & acquisitions remained historically strong topping $1.5 trillion in total value for the fourth year in a row.  However, deal count has declined ~7% & 13% over the past two years after the boom years of 2014 & 2015.  The private equity industry continues to be the main driver of sustained strength in M&A.  In 2017, the private equity industry hit record numbers of investment firms (~1,800) and capital raised but yet to be deployed ($820 billion – “dry powder”).  The vast number of investment firms looking to deploy the massive amount of dry powder overhang with fewer transactions has resulted in increased valuations across all industries and company sizes.  Add into the mix corporate balance sheets having more cash than ever before and the tax advantages of repatriation as part of Tax Reform, we expect private market M&A valuations to remain elevated in 2018.